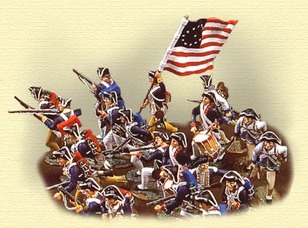 What is a revolution?

A political revolution is the overthrow of a system of government (often in a short space of time), where people become disgusted with the power hierarchy and rise up in rebellion. Sometimes a rebellion has no clear plans or solutions, leading to disorganisation and a return to the same state or worse than before.

Causes:  The writing of political philosophers like John Locke and Thomas Paine had a huge impact on British colonists in North America. Money did not go into local infrastructure, but mostly back to the mother country. Limits on goods produced in the colonies so that they not out-sell companies based in England). Colonists were also angered at British tax and trade laws. There were taxes placed on non-British imports; the Stamp Act (a tax in the form of a stamp on government documents). The British expected the colonies to pay for the debt incurred by the French and Indian War (started in 1754) through taxes. The First Continental Congress met in Philadelphia in 1774. A letter was sent to London demanding equal citizen rights and complaints of taxation without representation. People wanted a chance to influence new tax laws and abolish old ones.  Colonists began talking about independence and collecting weapons (but generally not thinking of war). In May 1775, British troops were sent to Concord to collect the weapons (the government was nervous). The British troops felt threatened and fired. Shots were returned and there were people killed on both sides.  The Second Continental Congress met. The discussion was about preparation for war against the strongest empire in the world. On July 4, 1776, the Declaration of Independence was signed.

Effects: The American Republic, based upon Enlightenment ideas, became a symbol of freedom in Europe and Latin America.  The United States Constitution became a model for liberal government.  The American Revolution's success inspired others to revolt against their governments.

The Influence of the Enlightenment on the American Revolution

During the Revolutionary period, some women colonists became politically active. They formed organizations and engaged in a variety of activities to lend their support to the cause of American independence. The Ladies Association of Philadelphia became the strongest and most well-known of these female organizations.

Task:
Using information from the documents on the following webpage: http://womhist.alexanderstreet.com/teacher/DBQamrevB.htm you will be completing a Document Based Question that will be slightly different from the one outlined on the webpage.

Relating authorial point of view to author’s place in society:
“Leonard von Eck, as a chancellor, would likely hold this view since as a government official he is probably very concerned with preserving order and the stability of the political structure. (doc. 1)”

Evaluating the reliability of the source:
“Lichtenstein may not be a completely reliable source, however, since he was pleading his own case and clearly had something to gain. (doc. 10)”

“Since Caspar Nutzel is a local government official writing to a superior, his acknowledgement of “excessive and unfair” actions by the government seems credible since it may have been somewhat risky to offer criticism of authority during this time period. (doc. 9)”

Recognizing that different kinds of documents serve different purposes:
“It is important to note that Lorenz Fries is commenting in a secret report probably not meant for publication; therefore, he is likely able to be more frank and honest than he might have been in a public document. (doc. 8)”

Analyzing the tone of the documents:
“The passionate tone of Muntzer’s open letter was clearly designed to incite further reaction among an already agitated peasant population (doc 6).”