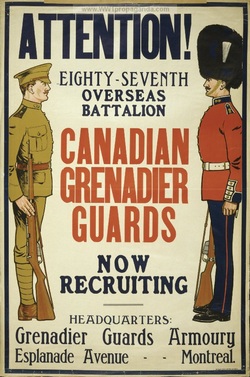 World War I or the First World War (sometimes written WW1 or WWI for short) was a war fought by many countries, which is why it is called a "world" war. It started in 1914 and ended in 1918.  Before World War II began in 1939, World War I was called the Great War, the World War or the War to End all Wars. 135 countries took part in World War I, and more than 15,000,000 people died in the war.World War I was fought on most of the continent of Europe. The actual fighting that happened during the war was fought on many different fronts. The Western Front was where most of the fighting between Germany and the Allies happened. The system of trenches marked the location of the Western Front. There was also a no man's land that broke into this area.Most of the fighting that happened in this area was trench warfare.

The Eastern Front was fought in Central and Eastern Europe and was one of the main places where World War I took place. The fighting done on the Eastern Front was not trench warfare like it was on the Western Front, but instead depended on having front lines of soldiers ready to fight the enemy.

The war was ended by the signing of many different treaties, the most important being the Treaty of Versailles.  World War I was the first war where tanks, aeroplanes, and submarines or underwater boats (U-boats) were used as common weapons.

Common Causes of War and Conflict

The Causes of World War 1

CHOOSE ONLY ONE OF THE FOLLOWING ASSIGNMENTS TO COMPLETE