The Origins Of World War II And The Policy Of Appeasement 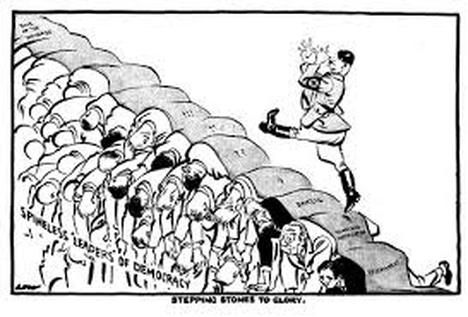 Even as the Versailles Conference was going on, new stirrings of nationalism served as precursors of what was to come. Italy's representative to Versailles, Prime Minister Orlando, was called home early because his government had suffered a coup led by Benito Mussolini. Mussolini appealed to Italian nationalism in his quest to rebuild the glories of Ancient Rome through his military leadership. However, most menacing of all was the Nazi movement in Germany, led by an Austrian named Adolf Hitler.

After World War I ended, Germany established a republican form of government under the leadership of General Hindenberg, a hero from the war. However, the government had countless obstacles in reestablishing order and stability. War debts were crushing, vital resources in the west had been claimed by France, and inflation became rampant as the country tried to rebuild itself after the devastation of the war. When the Great Depression spread throughout Europe in 1929-30, weakened Germany was the most vulnerable to its punch.

In their desperation, Germans were open to new political solutions, including those advocated by communism. On the other end of the political spectrum, Adolf Hitler, an Austrian artist who had fought in World War I, attracted attention as the leader of the German Socialist Workers Party. In a series of clever political moves, he established his party in the Reichstag, and eventually convinced Hindenberg to appoint him as chancellor. After Hindenberg died, he and his "Nazi" party came to dominate German politics with promises to restore German prosperity. That they did, but by blatantly breaking the provisions of the Versailles Treaty. He rebuilt the army, seized the resource-rich Rhineland from France, and played upon the loss of German pride suffered by the humiliations of the Versailles Treaty. His Nazi state was authoritarian and militaristic, and like Japan and Italy, also incredibly expansionistic.

Under Hitler, Germany began claiming territory around but outside its borders established by the Versailles Treaty. The claims were backed by military force, and at first they were only the lands that Germany believed had been unfairly taken from them by the Versailles Treaty. But eventually Hitler's forces attacked the Sudetenland, a part of Czechoslovakia with many German people, but also home to Czechs and other Slavs. Finally, with this action, Hitler experienced some reaction from the old Allied Powers.

The Munich Agreement and the Start of the War

England and France answered Czechoslovakia's pleas for help by calling a meeting with Hitler in Munich in 1938. Under the leadership of Britain's Prime Minister Neville Chamberlain, the Allies reached an agreement with Hitler, infamously known as appeasement, or giving Hitler the land he had already seized in exchange for his promise to not take any more. Chamberlain promised the British people upon his return home that he had achieved "peace in our time," but the war began the very next year when Hitler broke his promise by attacking Poland. England and France were still war-weary from World War I, but they reluctantly declared war on Germany. Chamberlain was replaced as Prime Minister by Winston Churchill, who had long warned Britain about the danger posed by Adolf Hitler.

"Once I really am in power, my first and foremost task will be the annihilation of the Jews. As soon as I have the power to do so, I will have gallows built in rows - at the center of the city in Munich, for example - as many as traffic allows.”
"Then the Jews will be hanged indiscriminately, and they will remain hanging until they stink; they will hang there as long as the principles of hygiene permit. As soon as they have been untied, the next batch will be strung up, and so on down the line, until the last Jew in Munich has been exterminated. Other cities will follow suit, precisely in this fashion, until all Germany has been completely cleansed of Jews."

Once Hitler was in power he began to make the Jews his permanent target and planned to make life so unpleasant for Jews in Germany that they would leave. The first major instance of this was the Nuremberg Laws. This was a set of laws to single out the Jew:

1. A citizen of the Reich may be only one who is of German or kindred blood, and who, through his behavior, shows that he is fit to serve the German people and the Reich.

2. Marriages between Jews and subjects of German or kindred blood are forbidden.

3. Extramarital intercourse between Jews and subjects of German or kindred blood is forbidden.

4. Jews are forbidden to fly the Reich and national flag and to display the Reich colors.

5. They are, on the other hand, allowed to display the Jewish colors. The exercise of this right enjoys the protection of the state.


Hitler's decision to eliminate Jews in Germany and eastern Europe resulted in 6 million deaths in concentration camps that specialized in efficient methods of extermination. The Holocaust was an unprecedented modern genocide that also targeted gypsies and political dissidents. The "final solution" to the "Jewish problem" included death by gassing, electrocution, phenol injections, flamethrowers, and machine guns. Others died in concentration camps from starvation and medical experiments.