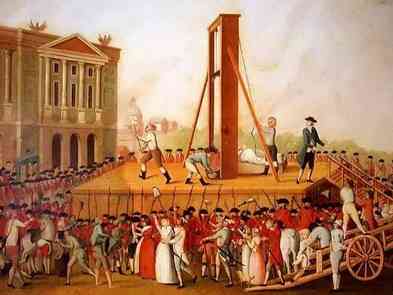 Causes of the French Revolution

The finances of the French Empire were a major cause for revolution. By 1789, France was bankrupt. The king’s of France had abused their power and France became a victim of deficit spending. The French king began to borrow enormous amounts of money to pay for their spending and incurred debt. These debts were also a result of war. An example of this was by 1789; France was still paying off debts incurred by the wars of Louis XIV that occurred in the late 17th and early 18th centuries. The country could no longer pay its debts, and the people of France began to suffer.  Furthermore, a number of social groups and institutions did not pay taxes of any kind. Many universities were exempt from taxation as were the thirteen Parlements, cities like Paris, the Church and the clergy, the aristocracy and numerous member of the Bourgeoisie. And of course, it was simply brilliant planning to continue to tax the peasants- peasants who, having nothing to contribute were, over the course of the century, forced to contribute even more.

The French social structure was divided into three estates. The First Estate was made up of the clergy. The clergy were a very privileged group and had a number of responsibilities. They included the registration of births, marriages and deaths, they collected the tithe (usually 10%); they censored books; served as moral police; operated schools and hospitals; and distributed relief to the poor. They also owned 10-15% of all the land in France. The land was all held tax free. The Second Estate was made up of the nobility. They too were a privileged group. They nobility held the highest positions in the church, the army and the government. As an order they were exempt from paying taxes of any kind.

The Third Estate however, was the victim of the first two estates. The Third Estate was made up of every one who was not a member of the first two estates. This was around 25 million people. The Third Estate was composed of the bourgeoisie, the peasantry and the urban artisans. As a class, the bourgeoisie—merchants, manufacturers, bankers, doctors, lawyers, and intellectuals, all had wealth. Wealth was nothing without status. The bourgeoisie were influenced by the nobility and tried to imitate them whenever possible. By 1789, the bourgeoisie had numerous grievances they wished addressed. They wanted all Church, army and government positions open to men of talent and merit. They sought a parliament that would make laws for the nation. They desired a constitution that would limit the king’s powers. They also desired fair trials, religious toleration and vast administrative reforms. These are all liberal ideas that were inspired by the Enlightenment and would appear after the summer of 1789.

The peasantry consisted of around 21 million individuals. The French peasants continued to live in utmost poverty. Peasants were victimized by heavy taxation- taxes were necessary to pay for the cost of war, something that had damaged the French economy. So, the peasants paid taxes to the king, taxes to the church, and indirect taxes on wine, salt and bread. By 1789 the plight of the French peasant was obvious. The price of bread soared and overall, prices continued to rise at a quicker rate than wages. The Third Estate was primed and ready for change.

The Terror: Was Hobbes Right?

During the summer of 1792, the leaders of the mobs on the streets had more real power than any government assembly. Although the mobs were made up of the poor, their leaders came from the bourgeoisie. Both men and women of the middle class joined political clubs. The most radical club in 1792 was the Jacobin Club. The Jacobins wanted to remove the king and create a republic.

In 1793, the Jacobins tried King Louis XVI for treason and found him guilty. By a very close vote they sentenced him to death. On January 21, 1793, the ex-king walked with calm dignity up to the steps to the scaffold to be beheaded by a machine called the guillotine. As Louis walked up to the guillotine he looked upon his people and said, “'I die innocent of all the crimes laid to my charge; I Pardon those who have occasioned my death; and I pray to God that the blood you are going to shed may never be visited on France.” With his death a new period in France had begun.

As dozens of leaders struggle for power, Maximilien Robespierre slowly gained control. Robespierre and his supporters set out to build a republic. They tried to wipe out every trace of France’s past monarchy and nobility. Many families named Leroy (“king”), for instance, changed their names. Robespierre even removed the kings, queens and jacks from playing cards and replaced them with more revolutionary images.

From July 1793 to July 1794, Robespierre governed France. This period became known as the Reign of Terror. The first victim was Marie Antoinette. They took her son Louis Charles from her and he disappeared under suspicious circumstances. Then she led off a parade of prominent and not-so-prominent citizens to their deaths.  The guillotine, the new instrument of justice, was put to work. Public executions were considered educational. The Revolutionary Tribunal ordered the execution of 2,400 people in Paris by July 1794. Across France 30,000 people lost their lives. Terror was the order of the day. In the words of Maximilien Robespierre, "Softness to traitors will destroy us all."

Georges Danton was the head of the Committee of Public Safety, which was responsible to fight the enemies of the revolution, to prevent counter-revolution from gaining ground. Most of the people rounded up were not aristocrats, but ordinary people. A man (and his family) might go to the guillotine for saying something critical of the revolutionary government. Eventually the Reign of Terror became too violent and even Danton spoke against it, which led to his execution.

When Robespierre called for a new purge in 1794, he seemed to threaten the other members of the Committee of Public Safety. The Jacobins had had enough. One man alone is paralyzing the will of the Convention. And that man is Robespierre." Others quickly rallied to his support. Robespierre was arrested and sent to the guillotine the next day, the last victim of the Reign of Terror

Great examples of how to analyze documents

The Rise of Napoleon

After the Reign of Terror and the death of Robespierre, the Directory had taken over France. The Directory was France's executive power between 1795 and 1799.  There were five members, or directors. It was effective in its first years, but then corruption and self-service set in. Internal bickering and in-fighting increasingly destabilized the country and, in 1799, two of its members plotted with a young general named Napoleon Bonaparte to overthrow their colleagues. The Coup succeeded and the Directory was dissolved. It was replaced by the Consulate.

Napoleon was a short man about five feet three inches tall. He was born in Corsica and at the age of nine was sent to military school in France. He would succeed through dedication and hard work to become one of the greatest military leaders in world history. He was appointed general by the same Directory that eventually overthrew.

Napoleon had created a plan to rule France and would soon become the First Consul of France. Napoleon wanted to build a grand French Empire, and started this by conquering many countries. One of his most notable wars was against Egypt in 1798-1799. There he found the Rosetta stone which was used to translate hieroglyphics, but he also weakened the French army. After this though, Napoleon set out on a wave of conquests that would make France the most powerful country in Europe.

In 1804, Napoleon crowned himself emperor. Traditionally a pope would crown an emperor. The pope waited at the cathedral to crown Napoleon; however Napoleon arrogantly grabbed the crown from the popes’ hands and placed it on his own head. After naming himself emperor, Napoleon wanted to conquer the world. Napoleon’s troops conquered Austria, Prussia, Spain, Portugal, and the Kingdoms within Italy. He dissolved the Holy Roman Empire, which was falling apart and reorganized it into a confederacy of German States. He claimed himself to be the new Charlemagne.

The Achievements of Napoleon

Napoleon was a great military leader but also a great administrator. He is responsible for numerous achievements during his rule. He helped the economy by controlling prices and by encouraging new industry to spark economic improvement. He created a national banking system and a common currency for the French Empire. He also built roads and canals throughout France.

His economic achievements are important but he also made many social changes as well. The creation of an educational system that was supervised by the government was the first of its kind. And his most notable achievement was the Napoleonic Code. Even though the Napoleonic code was not the first legal code to be established in a European country with a civil legal system, it is considered the first successful codification and strongly influenced the law of many other countries. The Code, with its stress on clearly written and accessible law, was a major step in establishing the rule of law.

The French Revolution: A Crash Course