The Origins of Agriculture 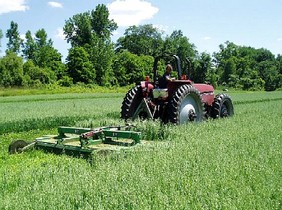 Agriculture is the deliberate modification of Earth’s surface through cultivation of plants and rearing of animals to obtain sustenance or economic gain.

Before agriculture humans existed through hunting and gathering, meaning the collection of food on a daily basis. About 250,000 people still engaged in hunting and gathering; these people lived in isolated areas of the Arctic, Africa, Australia, and S. America.  The first form of agriculture was vegetative planting - the reproduction of plants by direct cloning from existing plants, i.e. cutting roots/stems.  The word cultivate means “to care for” and a crop is any plant cultivated by people.

Hunting and Gathering
People grubbed food from the earth with their bare hands, then used simple tools made from stones or animal bones. Thousands of generations tried countless types of plants and roots, as man learned by experience which ones could be eaten.  He gathered insects, small reptiles and small animals.  Large insects were dried in the sun for future meals. Man is known to have eaten shellfish, frogs, snails, mice, snakes, dogs, horses, roots, lice, insects,

It was nature that finally taught man to save for tomorrow. People took example from animals and insects: dogs that bury bones, squirrels that hide acorns, bees that fill the comb with honey, ants that store up food in the hill.

This style of living is called Paleolithic.  Its characteristics are:
1)      limited population group
2)      no permanent settlements
3)      social equality

The change from Paleolithic to Neolithic societies
1.      From hunting to domestication of animals.
Instead of hunting, people learned to keep animals in a pen or pasture. Domestication: to tame something, to take it from the wild to live under the care of humans.  Probably started when wounded animals were brought back to camp.  It brought a more stable food source

2.      From gathering to agriculture
Perhaps the greatest discovery in the course of human history was the discovery of the function of the seed.  Every plant has the ability to reproduce.  This was probably discovered when some stray gathered seeds grew identical plants. Many historians believe women discovered the reproductive nature of seeds

The Impact of Farming on Hunter-gathers