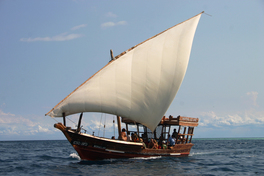 During 600 BCE-1450 BCE the Indian Ocean was a prominent world trade area.

​This sea based route could carry more products to their customers and increase the profit per trip increasing countries’ economies. This trade route extended from East Asia through India to the east coast of Africa. Trade winds, half of the year blowing northeast (December to March) and the other half of the year blowing southwest (April to August), were the primary factor on the movements of the merchants. Although these trips could last a year waiting for the monsoons, these trips were still highly profitable especially with ships like the Chinese treasure ship, the Junk. Because of the merchants having to wait for the monsoon winds the coastal cities would be a rich area of mixed cultures and religions. One example was the East coast cities off Africa of Sofala and Kilwa. Some examples of culture that was exchanged are Islam and Buddhism. Many new technologies were invented to assist in Indian Ocean Trade. Some of these were magnetic compasses, the dhow boat, and lateen sails. All these made navigating easier and more flexible because of the dhow boat. Some of the things traded in the Indian Ocean Trade are slaves, ivory, and gold from Africa, porcelain from China, and cloth from India. Unfortunately another thing that was helped spread was the Black Death from China though trade routes in the India Ocean and eventually ended up in Europe%