03 What can we learn from Classical Civilizations (Greece) ? 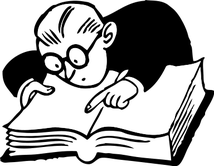 What will we study?
By the end of this unit you should be able to:

What is a classical civilization?

The period after the decline of river valley civilizations (about 1000 BCE - 600 CE) is often called the 'Classical Age.' During this era world history was shaped by the rise of several large civilizations that grew from areas where the earlier civilizations thrived. The classical civilizations differ from any previous ones in these ways:

1. They kept better and more recent records, so historical information about them is much more abundant. We know more about not just their wars and their leaders, but also about how ordinary people lived.

2. The classical societies provide many direct links to today's world, so that we may refer to them as root civilizations, or ones that modern societies have grown from.

3. Classical civilizations were expansionist, deliberately conquering lands around them to create large empires. As a result, they were much larger in land space and population than the river civilizations were.

During this course you will study the two Mediterranean classical civilizations (Greeks and Romans) and Classical China. But, first we will begin with Classical Greece.

What will we study 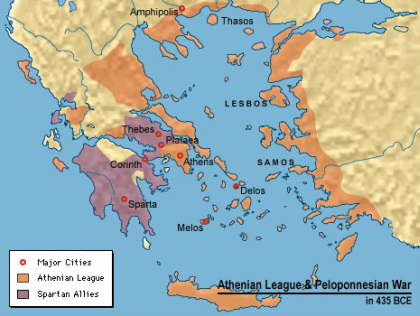 During this unit we will study the following topics:

*Note: Later in the year you will produce a comparative assignment that analyses the common characteristics and differences between Greece, Rome and China

While Athens was trying democracy as a form of government, its rival Sparta had two kings. One king might stay at home, while the other was away fighting battles. Fighting battles was what the Spartans did best. Greeks said that in a battle one Spartan was worth several other men. The Spartans spent so much time training for battle that they would have starved without slaves called helots. The helots worked on the Spartans' farms. They grew the food for the Spartan soldiers and their families.

Soldier state
Although every Spartan man had a farm, he spent a lot of his time preparing for war. He became a soldier when he was 20. However, a boy's training began much earlier, when he left his family home at the age of 7, and went to live in an army school. Discipline was tough. He was allowed only one tunic, and had to walk barefoot even in cold weather. He was taught how to live rough and steal food. He was warned it was foolish to get drunk, like some other Greeks did. Men lived in army camps even after they got married.

Growing up in Sparta
It was tough being a Spartan. Sickly babies were killed. Children ran around naked. Boys practised fighting and did athletics. Girls also did physical exercises. Spartan women had more freedom than other Greek women - a wife ran the family farm and gave orders to the helots or slaves. Old people too were shown more respect in Sparta than in other Greek states.

Spartan mothers told their sons before they left for battle, "Come back with your shield, or on it." Dead Spartans were carried home on their shields. Only a coward would drop his shield and run away.

The 300 Spartans
Sparta's most famous battle was Thermopylae. The year was 480 BC. A huge Persian army was trying to invade Greece. Barring the way at the mountain pass of Thermopylae were 300 Spartan soldiers led by King Leonidas, along with a few hundred other Greeks.

The Spartans' brave fight lasted three days. One story says that after they broke their swords, the Spartans fought the Persians with their bare hands and teeth! In the end, Leonidas and his Spartans lay dead. The Persians marched on to capture Athens. But soon afterwards the Greeks defeated the Persian fleet at the sea battle of Salamis.

The Golden Age of Greece 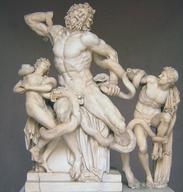 The Ancient Greeks were the first to use democracy as a form of government.  Under Pericles, male citizens in Athens participated in the daily running of government.  This form of direct democracy excluded all non-citizens, such as women and slaves.  Today, many governments around the world practice some form of democracy.

Greek philosophers, or "lovers of wisdom," used observation and reason to study the world around them.  This spirit of inquiry led to advancements in the arts and sciences, as well as examining the best form of government for men to live under.  Famous philosophers include Socrates, Plato, and Aristotle.

Early Greek literature was in the form of plays developed for religious ceremonies. Famous writers, such as Aeschylus and Sophocles, wrote tragedies andcomedies about human conflict and interaction between the gods and man.  These stories were very popular, and became the basis for modern literature. The Greeks were also the first historians.  Herodotus, known as the Father of History, wrote books chronicling historical events, such as the Persian War.

Greek artists portrayed the human figure in idealized realism.  Paintings and sculptures show humans in the perfect form.  Greek architects build elaborate buildings using marble and the Greek column.  The most famous example of Greek architecture is the Parthenon in Athens.  Many buildings around the world today use Greek architectural ideas.

Greek mathematician Pythagoras, developed a formula to calculate the relationship between the sides of a right triangle, a method still in use today.  Aristarchus, a Greek astronomer, discovered that the earth rotated on its axis, and revolved around the sun.  Eratosthenes discovered that the earth was round, and accurately calculated its circumference. Euclid wrote a book called The Elements, which is the basis for modern geometry.  A Greek scientist named Archimedes tried to use science for more practical matters, he showed how the use of a lever and pulley system could lift just about any weight.

Hippocrates, a 5th century BCE physician, studied the causes of illnesses and experimented with various cures.  He is also credited with creating a set of ethical standards for doctors called the Hippocratic Oath

What the Ancient Greeks do for us?