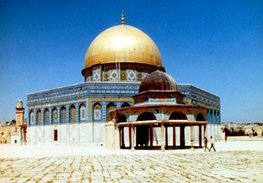 Islam, which when translated from Arabic, means "to submit to the will of Allah," is the youngest of the world's major religions. Worshippers of this monotheistic religion are known as Muslims, which means "one who submits to the will of Allah."  Islam is currently the second most practiced religion in the world, and experts predict that it will overtake Christianity as the most popular religion in the world sometime during the 21st century.

The Basics
Founder -Islam was founded by the prophet Mohammed.
Geographic Origin -Developed on the Arabian Peninsula in the year 622 CE, and quickly spread to other regions.
Currently Practiced - Islam is most dominant throughout the Middle East, including Southwest Asia and North Africa.
Significant Writings -The teachings of Islam are collected in the Qur'an.
Places of Worship -Muslims may gather to worship in temples called Mosques (see picture above).
Significant Religious People -The Caliph, or successor to the Prophet Mohammed; Imam, leader of prayers; and the Muezzin, or one who issues a call to prayer, causing the faithful to gather at the local Mosque.

Teachings and Beliefs
Mohammed received the word of God, or Allah, through the angel Gabriel while living in the city of Mecca. Townspeople soon became fearful of the Mohammed's preaching and he began to receive threats. As a result, he fled to the nearby city of Medina, where people began to believe in his message. The flight of Mohammed from Mecca to Median was instrumental to the founding of the religion of Islam, and is known as the Hegira. Thus, in 622 CE Islam was founded and this date became the starting point for the Islamic calendar. Mohammed and his followers later returned to Mecca and declared a jihad, or holy war, after which he captured the city. Under Mohammed's leadership, the basic teachings of Islam were established, which are known as the Five Pillars of Islam. Every Muslim is expected to follow these rules in order to lead an ethical life:
Golden Age of Islam

Islam began in the Arabian Peninsula in the early 7th century CE.  It quickly spread throughout the Middle East before moving across North Africa, and intoSpain and Sicily.  By the 13th century, Islam had spread across India and Southeast Asia.  The reasons for the success of Islam, and the expansion of its empire, can be attributed to the strength of the Arab armies, the use of a common language, and fair treatment of conquered peoplesArab armies were able to quickly conquer territory through the use of advanced tactics and the employment of horse and camel cavalry.  Islamic rulers were very tolerant of conquered peoples, and welcomed conversion to the Islamic faith.  All Muslims must learn Arabic, so they can read the Qur'an, the Islamic holy book.  This common language helped to unite many different ethnic groups within the Islamic empire.  It also made possible the easy exchange of knowledge and ideas.

Golden Age
Islamic civilization experienced a golden age under the Abbassid Dynasty, which ruled from the mid 8th century until the mid 13th century. Under the Abbassids, Islamic culture became a blending of Arab, Persian, Egyptian, and European traditions.  The result was an era of stunning intellectual and cultural achievements.

Arts & Literature
According to the teachings of the Qur'an, Islamic artists were forbidden from using human figures in religious art. Therefore, they developed a style of geometric shapes and patterns that were used to decorate religious buildings called Mosques.  These geometric patterns usually contained verses from the Qur'an written in a stylized form of decorative handwriting called calligraphy.
Non-religious artists were allowed to use human figures.  This type of work most often appears in scholarly works of science or literature, which were lavishly illustrated.

Islamic architects borrowed heavily from the Byzantine Empire which used domes and arches extensively throughout their cities. An example of this use can be seen in the Dome of the Rock, a famous mosque in Jerusalem.

There were many different styles of Islamic literature.  Most works were based on the Qur'an, but some Islamic artists wrote poetry about the joys and sorrows of love. Also, stories from other cultures were adapted and rewritten for Islamic civilization.  The most famous collection is called The Thousand and One Nights, which is a collection of tales that includes such well known stories as Aladdin and His Magic Lamp.

Math & Science
Islamic scholars studied both Greek and Indian mathematics before making important contributions of their own. The most well known Islamic mathematician was al-Khwarizimi, who pioneered the study of algebra.  His textbook on the subject became a standard in European universities for centuries. Islamic scholars were also skilled in astronomy.  They studied eclipses, the rotation of the planets, and calculated the circumference of the earth to within a few thousand feet.

Medicine
Many advances were also made in the field of medicine.  Physicians and pharmacists were required to pass exams before treating patients.  They setup hospitals that had separate areas for trauma cases, this is the basis for today's emergency rooms.  Physicians developed treatments for cataracts, used a variety of herbal remedies, and were adept at treating a variety of injuries. Islamic pharmacists were the first to mix sweet tasting syrups with medicine, ensuring that they would be taken.  Ibn Sina, a famous Islamic physician, wrote a book called Canon on Medicine, which was an encyclopedia of Greek, Arabic, and his own knowledge of medicine. This book became the standard medical text in Europe for over five hundred years.

Economic Achievements
Under the Abbassids, a vast trading network was created which helped to spread religion, culture, and technology among the different peoples of the empire.  New business practices such as, partnerships, the use of credit, and banks to exchange currency, were developed to handle the increase in trade.  The establishment of such vast trading networks made the many nations within the Islamic Empire very wealthy, and helped to stimulate many of their cultural and intellectual achievements

Law
Islam developed a system of law based on the Qur'an.  This system was created to help people apply the Qur'an to everyday life and situations. The book of laws, called the Sharia, regulates all aspects of life including, moral behavior, family life, business dealings, and government.