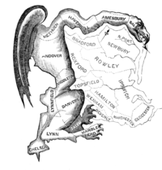 During this unit we will study:

A. The territorial dimensions of politics (nature and meaning of boundaries, influences of boundaries on identity, interaction, and exchange, federal and unitary states)

B. Evolution of the contemporary political pattern (Nation-states, colonialism and imperialism)

The event in history that marks the beginning of the modern state is the Peace of Westphalia, negotiated in 1648.  The treaties that constituted this peace concluded Europe's most destructive internal struggle over religion (the Thirty Years War) and contained new language recognizing statehood and nationhood, clearly defined boarders, and guarantees of security.

The term geopolitics refers to the global-scale relationships between sovereign states. The theme of political-economic conflict between democracies and Communist countries during the Cold War (1945-1991) is a common area if geopolitical questions on the AP Human Geography Exam.

How Do States Organize Themselves?

Supranationalism and the State

The folllowing PowerPoint should be used in conjunction with your textbook reading, my notes and our class work. It examines the growth of different Supranational Organizations and their effect on the State.
Supranational Orgs from AP HUG @ TERRA

Why Do States Cooperate With Each Other? 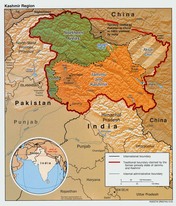 India and Pakistan have been fighting over Kashmir since both became independent. During the period of British rule it was a state ruled by a Hindu Rajah. However, most of the population is Muslim. In 1947 the ruler decided to join India (a predominantly Hindu state), though the people, if asked, might have wished to join Pakistan.  Muslims in Kashmir have wanted independence. During the 1980s they increased terrorist activities. India accuses Pakistan of supporting them. Indian troops have occupied Kashmir to suppress protests. Indian and Pakistani troops have fought from time to time. Most Kashmiri people want independence instead of control by either country. China also has claims to parts of Kashmir. Another reason behind the dispute over Kashmir is water. Many rivers start in Kashmir. Some of them are tributaries which flow into Pakistan. Pakistan has been apprehensive that in a dire need India under whose portion of Kashmir lies the origins and passage of the rivers, would use its strategic advantage and withhold the flow and thus choke the agrarian economy of Pakistan

In 1950 the Chinese Red Army moved into Tibet to ‘liberate’ the region. In 1959 there was an uprising amoung Tibetans which prompted the Dalai Lama to flee to Indian, where he has lived in exile. Tibetan customs and traditions were repressed. Agricultural reforms destroyed the region. US support for rebellion was withdrawn in the mid 1970s. There was mass deforestation and forced labour camps that led to over 1.2 million deaths. Religious freedom was ended, however, limited freedom was granted in the 1980s. Eventually ethnic Chinese were encouraged to move to Tibet through government programs. The purpose of this was to increase the number of Chinese people, thus increase the government’s claim to Tibetan land. The Dalai Lama's 2005 proposal for "high-level autonomy" for Tibet, evolved from a position of advocating Tibetan independence, has been compared to one country, two systems. He has said that his proposals should be acceptable to China because "one country, two systems" is accommodated for in the Chinese Constitution. (See Hong Kong and Macau)

Geopolitics "Them" vs. "Us"