What we will study?

The advantages of large scale production that result in lower unit (average) costs (cost per unit)
Economies of scale can affect all aspects of a business.  McDonald’s 14,098 locations dwarf the next closest hamburger chain Wendy’s 5,876 locations. Assuming each chain spends the same amount per location on advertising, McDonald’s spends triple the amount Wendy’s does promoting its burgers. This marketing economy of scale serves McDonald’s in several ways.

First, the average person sees a McDonald’s ad three times more often than a Wendy’s ad, which should lead to greater sales. Second, McDonald’s has more locations at which to purchase hamburgers, so the advertising has a greater chance of pulling a consumer into a McDonald’s. Third, the large marketing expenditure created by combining 14,000 locations creates a massive moat protecting McDonald’s from competition.

The industrial revolution is over, and gone with it is some of the power of economies of scale. Today, businesses of all sizes can compete with large multinational corporations, particularly on the Internet. The Internet acts as a great equalizer, allowing small companies access to business resources previously reserved for large companies. The Internet allows businesses to
By successfully using the Internet, companies of all sizes can remove the barriers of economies of scale.

When Amazon.com was launched, Jeff Bezos was operating out of his garage. Today Amazon boasts sales in excess of $50 million annually. Google was a school project of Serge Brin and Larry Page. Mark Zuckerberg was horsing around when he created Facebook in his dorm room. Some of today’s largest and most profitable businesses started as tiny ventures that have expanded through skillful use of the Internet.

What is a multinational corporation?

IMPORTANT NOTE: A conglomerate is a combination of two or more corporations engaged in entirely different businesses that fall under one corporate group. 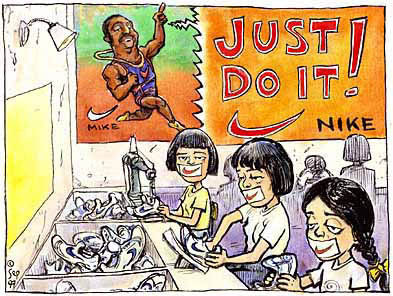