What is unemployment, and what is it not?

Most governments have the key macroeconomic objective of achieving low levels of unemployment. Not being employed does not necessarily mean being unemployed. The unemployed consist of those registered as able, available and willing to work but cannot find work despite an active search.

It is not just somebody who doesn't have a job!

Stay at home mothers and fathers, the retired, students and prisoners are all people who are not working, but neither are they actively seeking work – these people would not figure in the unemployment rate for a country or region. 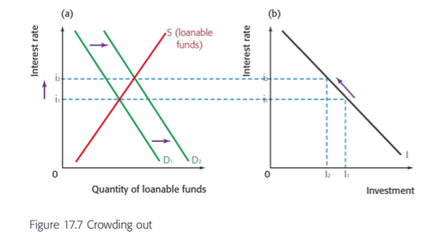 When governments run budget deficits in order to finance government spending to boost the economy a problem known as ‘crowding out’ can occur. To generate money for government spending, governments sell bonds to financial institutions such as banks, who then sell these on to consumers. What they are essentially doing to increasing demand for savings.

Here should have noticed a paradox as the government spends money to boost the economy, but by selling bonds they are increasing demand for savings which leads to less consumer and investment spending.

Another way that the government can raise funds for spending is by raising taxes. As you know this can lead to a reduction in consumer and business spending and therefore a decrease in aggregate demand.

If the government raises the money for spending by taking out loans from banks then there will be less credit available to firms for investment and thus a decrease in aggregate demand. Also, the sheer amount of money the government is likely to borrow would have an upward pressure on interest rates. Higher interest rates mean firms and consumers are less likely to borrow and therefore spend.