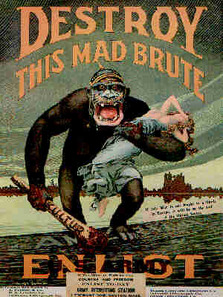 How did World War 1 start?

Click here to play an excellent game on the the causes of World War 1
On 28 June 1914, a Serbian shot an Austrian. Within six weeks, many of the countries of Europe had become involved in a war that was to cause the deaths of 10 million soldiers, but was the assassination the only cause of war?

Four underlying causes of warThe assassination of Archduke Franz Ferdinand signalled the rapid slide into world war, but this wasn't the only cause. There were underlying causes in the run-up to the First World War.

In the 1930s, historians argued that there were four underlying long-term causes of the First World War:

The nature of World War I?

World War I is often defined by the optimism that countries had going into the war in contrast to the horror, shock, and slaughter that traumatized them by the time the war ended in 1918. The balance of power struck in 1815 had been strong enough to delay conflict so that no one alive in 1914 could remember the devastation of war, and almost every nation glorified the excitement of war. The two sides settled into the Allied Powers-(England, France, Russia, and Italy (who later switched sides); and the Central Powers; Germany, Austria-Hungary, and the Ottoman Empire. The war was fought on two fronts:

Russia withdrew from the war in 1917, releasing German soldiers to transfer to the Western Front, but U.S. soldiers supplemented French and British soldiers there so that the stalemate was finally broken, with the armistice occurring in November 1918. The net effect of the war was the slaughter of a huge portion of a generation of young men, primarily from Russia, Germany, Austria-Hungary, England, and France. Arguably, Europe never fully recovered from the loss. 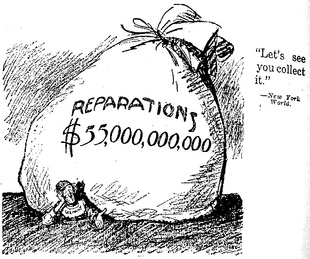 The "Great War" is a marker event in world history because it is the first in a series of events that led to declining European power and ascending power for the United States and Japan. However, the Versailles Treaty at the end of the war is almost as important event as the war itself because it changed the nature of international relations and set the stage for World War II.

Although 27 nations gathered at Versailles Palace in France in 1919 to shape a treaty, men from three nations dominated the proceedings: David Lloyd George from Britain, Georges Clemenceau from France, and Woodrow Wilson from the United States. Russia, who had pulled out of the war in 1917, was not represented. Woodrow Wilson came to the meetings with his plan, called the Fourteen Points, which was grounded in two important principles:

Britain and France came to Versailles with different motivations. After all, their countries had suffered a great deal more from the war than the United States had. For example, whereas Britain lost almost a million young men and France lost almost 1,400,000, the United States lost only about 115,000. A great deal of the war was fought on French soil, and so France suffered devastation of cities and countryside, and even French people who were not soldiers experienced the war first hand. As a result, George and Clemenceau were less idealistic than Wilson. Revenge and control of Germany, who was a more immediate threat to them than to the United States - were more important to France. The treaty that resulted was a compromise among the three countries. The many provisions include these important ones:


The treaty was a fiasco that satisfied almost no one and infuriated many. The Turks and Arabs of the former Ottoman Empire, as well as people of Germany's colonies, couldn't understand why eastern European countries were created as independent countries and they weren't. What's more the British occupied many areas of the Middle East, and did not leave once the treaty was signed. The League of Nations excluded Germany and Russia from membership, and the United States Senate failed to ratify the treaty and never joined the League. As a result, the international peace organization had very limited authority from the beginning. However, the most immediate reaction came from Germany, who saw the treaty as unfairly blaming them for the war and punishing them so severely that they could not recover. Their discontent provided fertile grounds for the rise of a demagogue that of course happened in due time.

An overview of WW1